The future of society: why a lot of big organisations will cease to exist

This post is an attempt to predict what the following decades will look like. I wrote a more technical post about this 3 years ago, which still makes sense far as I’m concerned.

Somehow, my understanding about how this applies to non-software things has evolved, and after trying to make my point on twitter, I decided to elaborate in this blog post about my assumptions on the future.

I’m only slightly aware about “the how” of the technology that could drive these things. My assumptions are purely based on my observations about how people interact with devices and technology at this very moment.

I would definitely say the past decade has been all about knowledge economy, i.e. the democratization of knowledge.

Knowledge used to be something people used to consider exclusive. In the world of today, people no longer consider knowledge something exclusive, as almost everyone can search information about almost anything on the internet. One could say, that it is no longer valuable what people know, but what makes the difference is how people apply and combine that knowledge.

As knowledge is becoming a commodity, people are starting to share knowledge, others improve it and publish their conclusions. One could say that the speed by which we learn is growing exponentially, just because we can share it and get feedback in a way people from a few decades ago could not even have imagined. 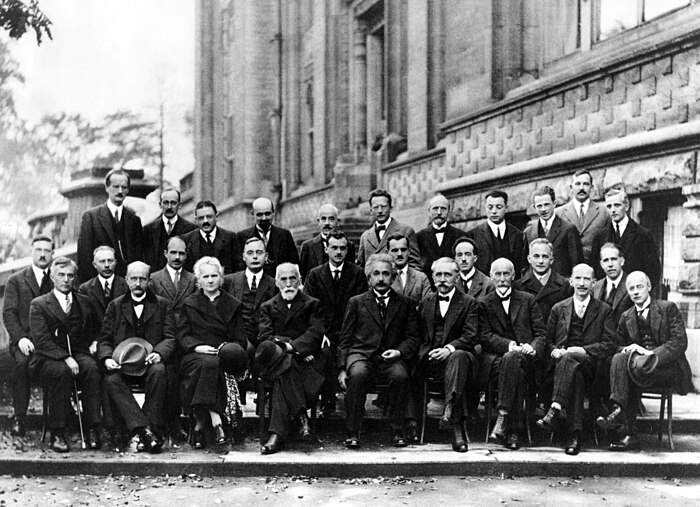 Let’s take a look at a picture of one of the most famous science conferences (i.e. the fifth Solvay conference in Brussels-Belgium) that ever happened, and think about how these people communicated:

Think about how much effort these people had to go through, just to reason about their knowledge with other people, and about how hard it was for an outsider to get in to these subjects, and how constrained your knowledge base was.

Think about what they could have achieved, if only they would have been able to communicate the way we can today. Today we have almost limitless access to knowledge, and the speed by which we can reason about and verify assumptions is mind-boggling.

But, that is also the problem of the current society: people still haven’t adapted to all this knowledge being available, so they don’t know how to cope with it.

I would say, that in general, you would have to be aware that knowledge has become a commodity, and you should treat is as such.

The next decades: power to the people

Taking the previous part of this post, I would think that this decade will be all about learning to cope with knowledge as a commodity, but I as a direct consequence of this, I see one other big thing happening: the “consumerization” of things.

It is my personal opinion, that people are starting to embrace “knowledge as a commodity”, and start to realize they no longer need all this overhead of a “classical enterprise” to make a difference. Things like Kickstarter give the power to innovate to the people. As knowledge is freely available, a lot of things will no longer require all the overhead of a classical enterprise.

Think about this: in the future not even knowledge will be a commodity, but also the ability to produce something from scratch would be a non-event for a person.

This would of course imply that the need for middle-men, or even the classical big organisations as we know them today will simply cease to exist, just because people can do stuff themselves.

This is also one of the reasons I consider “anti-fragile” by Taleb to be such a ground-breaking book. I think his vision will align with the future of society.

On to the tech part - Conway’s law

Respecting Conway’s law - which is quite popular lately -, the need for one big service/website/server/… would cease to exist, but every single person would have their own server, or even better multiple servers. Think about this for a while: why would you need Facebook, if you would be able to share your pictures and messages directly with your relatives and friends, just by having some kind of a digital handshake that somehow allows access to things.

Why would we need to have one big organisation that indexes the whole of internet (i.e. Google etc), if we would be able to access all this information directly on the devices they were published on?

People have been predicting this for a while, and it is known as “The internet of things”, or IoT for short.

This will happen, the question is just where, when and how.

It is my personal opinion that the next decade’s teenagers will actually start building the IoT, based on existing protocols (i.e. https, combined with a rangescan, or some multicast extension) first, and once that we have this technology, people will look for the best fit.

There are a lot of people who want to do it the other way, i.e. let’s build a protocol that supports the IoT, and people will start using it. However, I am under the assumption that the technology problem will only need to be solved when it becomes a problem, and not sooner. As long as people are not using their devices as micro-servers directly very intensively, they will opt for a good-enough protocol and use a work-around, until they finally realize then need something different then the existing http thing everybody is using right now.

As better solutions usually emerge when the experience in the problem-space grows, I would opt to think designing an IoT protocol right now might make too much wrong assumptions…

Just to clarify, I am not saying that individuals and corporations should seize their attempt to build an IoT, or will be unsuccessful with it. So by all means, if I insulted anyone with this blog post, please accept my apologies.

I just think the tech implementation will not be the main driver behind this revolution. However, once people are aware that the current tech stack is not suited for IoT, a technology will emerge, but - as happened before - it is not necessarily the best technique that will win the battle.

So, there you have it, another one of my brain-dumps (took about an hour, and is way longer than I initially intended). I truly think this is the way the world will evolve, and while it might be a blunt prediction, I somehow hope that you can understand and follow my path of reasoning about why I think the next big thing will be “consumerization”…